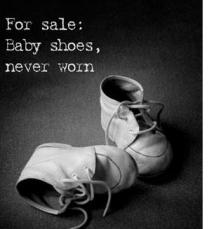 Legend has it that Ernest Hemingway was once challenged to write a story in six words.  He came back with the following:

A full story in short expression. A beginning, a middle, an end. Leaves you wanting more, questions unanswered. [Yes, those sentences are only six words, too. I am practicing what I am about to preach!]

In 2006, given the urban legend of Hemingway’s ultimate short story, Larry Smith and his personal storytelling community SMITH magazine launched a six-word memoir challenge and began collecting submissions from famous and not-so-famous writers seeking to capture their life stories in six words or less. The online response was both immediate and powerful.

Less than two years later, the six word memoir phenomenon really gained momentum with the SMITH’s release of “Not Quite What I Was Planning: Six-Word Memoirs by Writers Famous and Obscure,” which was named one of Amazon’s Top 100 books of 2008. Fast forward to 2012, where a number of new six word memoir books have been released including “It All Changed In An Instant,” “I Can’t Keep My Own Secrets” (teen memoirs), and “Oy! Only Six? Why Not More?” (memoirs on Jewish life).

The popularity of the exercise does not stop with books. There are a number of knock-off sites, including a Six Word Story (apparently not memoirs) website. Organizations are using the exercise to help describe important elements of their mission (as evidenced by this blog post). And even Oprah is getting in on the trend (albeit late by Oprah standards) in her February 2012 issue of O, The Oprah Magazine.

The SMITH magazine website continues to capture six word memoirs today. Some are poignant. Others are sad. Many are profane. And a few are just downright silly. But they all capture the essence of that person’s personal story in exactly six words.

Whether that legend is true or not, the six word exercise offers two key truths for us to consider:

The six-word memoir is a special challenge that asks us to capture the very essence, the essential story in a very short time. Even shorter than an elevator pitch, using only six words forces us to distill something complex – like our lives or our organization’s mission – into a very short expression. Doing this well (and you don’t need to be Hemingway to do this well) enables you to pull the reader into wanting to learn more about your story.

Wanna have some fun? Here’s a two-part challenge for you to consider:

And when you’ve done both those things, you can add one more six word memoir to your dossier:

“Have something in common with Hemingway.”

P.S. If you’re up to the challenge, feel free to post your six word memoir (personal or organizational) as a comment to this post so that others can enjoy your brilliance – and brevity!